Quesada Restaurants and Mediazoic are proud to announce the launch of Radio Quesadatude, a digital radio initiative that aims to capture musically that fun, friendly store energy created by a busy staff serving passionate fans the food they love, in 26 Quesada 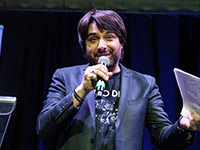 restaurant locations across Canada. It features an uninterrupted stream of music both from local and international artists from over 50 countries.

The station was launched officially as part of the Canadian Film Centre’s ideaBOOST LaunchPad event, held May 8 at Toronto’s Steam Whistle Brewery and hosted by CBC personality Jian Ghomeshi. Mediazoic’s RadioMogul was accepted in the fall of 2013 into the digital entertainment incubator’s 3rd cohort, and the event showcased each of the six (6) innovative companies.

“We are thrilled to work with and direct the evolution of RadioMogul.” says Ana Serrano, CFC’s Chief Digital Officer. "Through research we know there's a need in multiple markets for brands to create persistent engagement with their customers on all platforms. RadioMogul is a proven solution that uses people's intrinsic connection to music to deliver for brands the persistent customer engagement they need to increase loyalty and sales.” 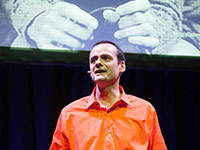 The new station’s curator, Mediazoic founder & CEO Greg Nisbet, took the stage in front of a crowd of over 300 digital and entertainment professionals and, after talking about the emotional power of music and its effect on the brain, explained the concept of “custom radio” and how Quesada was using it to “give the brand a soundtrack that customers would associate with the great food."

“As the Quesada folks know, this station is very personal to me, my musical playground if you will, the result of a lifetime of music-intensive world travel.” said Nisbet, speaking after the event. “To Quesada’s great credit, they don’t set any limits on what can be played, as long as it reflects the fun, energetic and friendly vibe you find in Quesada’s 25+ restaurants. We’re not talking about mariachi music here. It is truly a music mix you will not find anywhere else.” 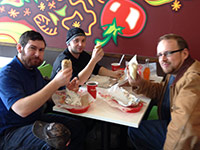 Canadian artists featured on the station include David Myles, Royal Wood, The Strumbellas, Hey Ocean, Feist, Harlan Pepper, Tegan & Sara, Sam Roberts Band, and many more. The station throws in classic songs from many eras, including gems from U2, Sheryl Crow, R.E.M., and Lenny Kravitz, and even some famous "one-hit wonders” that have already proven to get feet tapping and heads bobbing throughout busy Quesada locations. 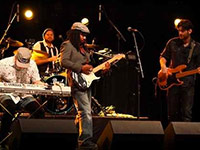 "When friends of mine came up to me and told me that they had heard our song Zero To Eleven in a Quesada Restaurant I was floored”, enthuses Toronto-based singer/songwriter Julian Taylor, "Sometimes it's very hard for Indie bands to get airplay on mainstream radio and this kind of exposure is fantastic."

The launch of Radio Quesadatude follows an extensive testing period in stores across the Quesada network. With Quesada CEO Steve Gill coming from a software background himself, he wanted a solution that could be 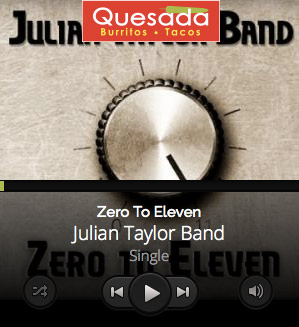 delivered both digitally and in-store and that was seamless from the point of view of Quesada franchisees all over Canada. The station offers uninterrupted music 24/7, runs automatically on the stores’  point of sale system, and is designed to restart on “shuffle” each listen so that it is never the same music experience twice.

“We think a Quesada customer is special, and deserves the very best.” says Gill. "Our focus is on the food, but everybody knows that music can set the tone and enhance the dining experience. The folks at Mediazoic are as obsessed with quality music as we are with quality food, and we think our customers will be the real beneficiaries of that.”

About Quesada Restaurants: Quesada is a Canadian-owned and operated, affordable, fast casual restaurant chain with hands-on, ground floor opportunities and established operating systems. Quesada is a 4-time Winner of NOW Magazine’s BEST Awards. It’s home of The Famous Big Ass Burrito, and proudly offers “Made Fresh For You” salsas and sauces for a distinctive OH-WOW taste kick. Quesada first opened in 2004 and now operates four corporate restaurants and multiple franchise outlets. The Company expects to open about 300 franchised restaurants in the next five years.

About ideaBOOST: ideaBOOST is a business accelerator with a difference - a bootcamp for companies that want to navigate an entertainment ecosystem that has been radically disrupted by new technologies and demanding audience expectations. Companies selected to participate in ideaBOOST get the budget, tools, training, and mentorship designed to help bring their product to market and improve their chances of success with audiences, investors, and partners. ideaBOOST is an initiative of the CFC Media Lab, with founding partners Corus Entertainment, Google and Shaw Media. http://www.ideaboost.ca/